The SSD market right now is highly competitive, with multiple brands duking it out for larger market shares through offering different great SSD products. Kingston has proven that it has products that sell well as it announced that it owns 16 percent of global channel SSD unit market share for 2016. 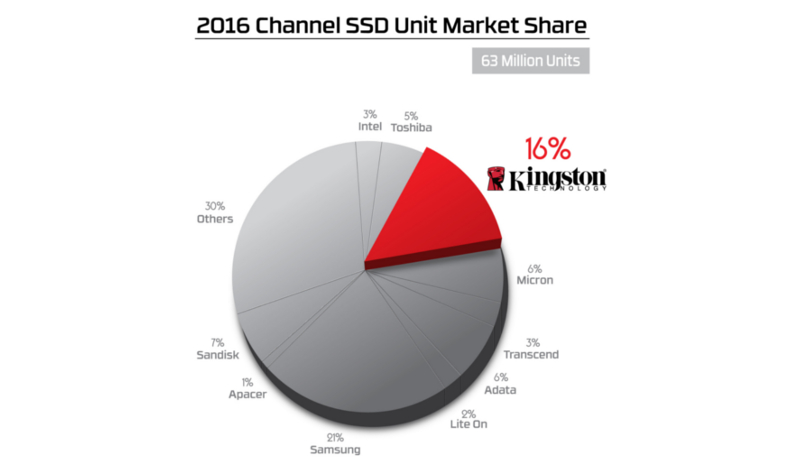 Kingston has announced that it owns 16 percent of the global channel SSD unit market share for 2016. Data was compiled by the research firm, Forward Insights, which has been analyzing the non-volatile semiconductor industry since 2008.

According to Forward Insights, a total of 63 million SSDs were shipped worldwide in the channel in 2016 with Kingston® accounting for nearly 10.1 million units. The amount represented 16 percent or second-most in the global market, showing Kingston’s growth as one of the top suppliers of SSDs. The sales channel is comprised of distributors, resellers, retail/e-tail, system builders and solutions providers.

The desire to switch to SSDs continues to grow as consumers and corporate customers alike see the performance benefits of upgrading from hard-disk drives. For nearly 30 years, Kingston’s focus and core sales strength has formed terrific relationship with channel partners worldwide, which has boost the SSD business growth globally since the first drive shipped in 2009. The latest results from Forward Insights help validate these efforts and the success shall be shared with Kingston’s channel partners.

Forward Insights has been at the forefront of providing independent market analysis and information to many manufacturers including Kingston. “Our research showed third-party SSD manufacturers accounted for 60 percent of all channel shipments last year as a number of the semiconductor-based vendors de-emphasized their channel business,” said Forward Insights. “Although under allocation since mid-Q2 2016, channel shipments as a whole remained strong and Kingston was one of the top leaders in this category.”