Mobile data speeds are ever increasing, thanks to advances in wireless mobile telecommunications technology. Just a few years back, 4G LTE was rolled out aggressively; now 4G speeds are available in many parts of the country. Not to rest on their laurels, PLDT and Smart have recently signed a Memorandum of Understanding with Huawei, to conduct research and development into 5G, the fifth-generation wireless broadband technology. 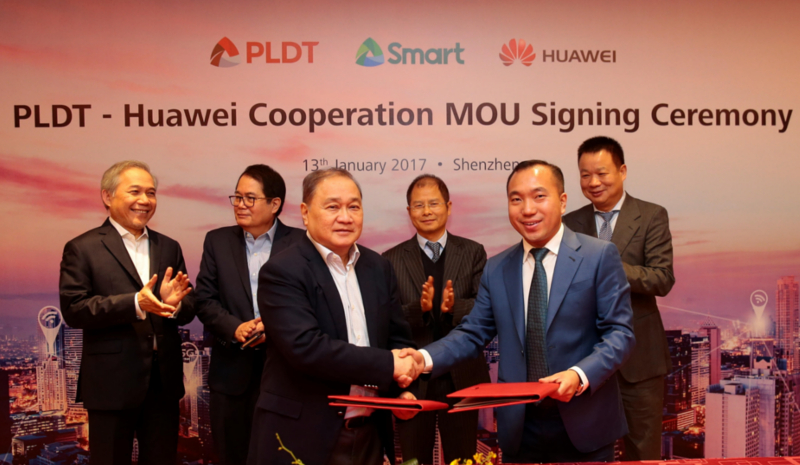 In a recent visit to the Huawei headquarters in Shenzhen, China, PLDT and Smart Chairman, President, and CEO Manuel V. Pangilinan signed a Memorandum of Understanding (MOU) with the leadership of Huawei, led by Jacky Gao Kexin, CEO of Huawei Philippines.

Under the MOU, PLDT and Smart will work with Huawei to shape the strategic and commercial development of the 5G ecosystem in the Philippines. In particular, the two parties are looking to identify and develop the areas of technological innovation needed to deliver 5G, which is expected to provide the foundation for the digital connected society.

Plans include setting up a 5G innovation lab, and the creation of a showcase network.

Smart is in the middle of a multi-year, multi-million dollar nationwide network expansion program to improve both coverage and quality of service, particularly its 4G LTE (Long-Term Evolution) service. A major leg of this network expansion was recently completed in Metro Davao, where Smart users are already reporting much improved mobile data experience.

The rollout is currently underway in Metro Manila and in Metro Cebu, and is expected to significantly boost Smart’s voice, SMS, and mobile data services, specially its indoor LTE coverage, in these urban centers. An upgrade of PLDT’s fixed access networks, part of the company’s transformation toward 5G-readiness, is also underway.