oppo88 oppo f3 plus13 oppo selfie experts11 oppo smartphone26 selfie smartphones15 smartphones213
OPPO has another hit on their hands with the F3 Plus, as it has sold over 8,000 units since the recent three-day road show.

There’s no doubt that Filipinos love taking selfies, and no one knows this more than OPPO. They’ve continually released smartphones that take great selfies, which are received well by the public. The new OPPO F3 Plus is no exception, as it has sold over 8,000 units since the recent F3 Plus road show. 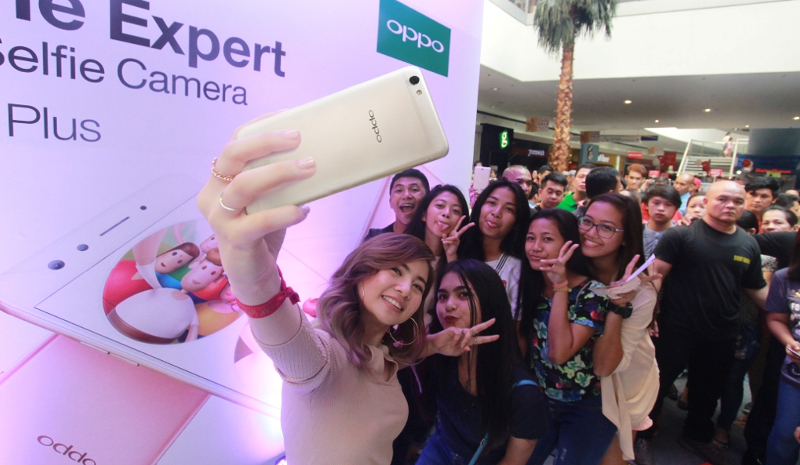 The groufie revolution has officially begun with the recent three-day tour of OPPO’s flagship dual selfie phone, the F3 Plus. Over 8,000 units were sold in concept and dealer stores nationwide since the debut sale last April 1, marking a new era in mobile photography.

“The F3 Plus was developed to make it easier to take the best group photos during special occasions or those little moments with friends and family,” OPPO Philippines Brand Marketing Manager Stephen Cheng said. “The success of our three-day sale tells us that our newest Selfie Expert answers the growing need for perfect groufies.”

The tour was held simultaneously in SM City Baguio, SM Mall of Asia, SM City Cebu, and GMall Davao. At the Manila leg of the tour, lucky guests were able to catch Gretchen Ho, Ella Cruz, and Ronnie Alonte during the first day of the sale. O-fans in Cebu also got the chance to take groufies with Janine Gutierrez, while those based in Davao were thrilled to join Kris Bernal as she demonstrated the new dual selfie camera phone.

The three-day road show welcomed O-fans with fun-filled activities that allowed them to give the F3 Plus a try. Adding to the 16MP selfie-focused main camera, the 8MP sub-camera showed guests how easy it was to take groufies without a selfie stick through its wide, 120-degree angle design.

O-fans were also able to test the built-in Smart Face Recognition feature which prompted them to switch to “Group Selfie” mode whenever more than three people were detected. OPPO’s Beautify 4.0 photo editing software further made it easy to smoothen out blemishes for flawless results.

Photography enthusiasts in the crowd had their share of excitement after trying out the rear camera. Customized with a Sony IMX398 sensor, the 16MP back camera let O-fans take shots that looked like they were taken by a professional.

For more details about the OPPO F3 Plus, visit https://www.facebook.com/OPPOPH/ or log on to http://www.oppo.com/ph/index.html.