Sheldon Cooper was the quirky theoretical physicist in the show ‘Big Bang Theory’. He’s super smart and loves comic books and pop culture, getting those smashed into his eccentricities. In the past seasons of the show, we get a glimpse of how Sheldon grew up and what it was like for him. Thanks to Warner TV’s new show, fans of Dr. Cooper need not wonder about his childhood anymore, as ‘Young Sheldon’ explores the quirky character’s youth and how it shaped him to be the man he is now.

Premiering on Tuesday, September 26, only on Warner TV, we’ve come up with a list of why you’ll fall in love with Young Sheldon. 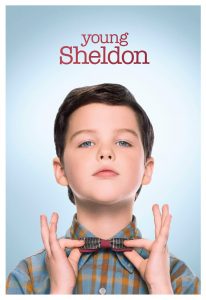 1. He’s a gifted young mind
At just nine years old, Sheldon is going to high school, and even there he is intellectually superior to his classmates. He is adept in various scientific fields and has an immense understanding of various theories. This makes him a certified wunderkind. But as much as his intellect is an asset it can also be a challenge for any kid trying to navigate his way through high school.

2. He’s never afraid to march to his own beat
You can say many things about Sheldon, but he is proudly nonconformist. He lets his geek flag fly high and proud, unafraid of whatever other people may say or do to him. His lesson about the value of individualism is especially relevant in this day and age, so this might be a great thing to pick up from our hero.

3. He’s not afraid to question authority
Being a math and science genius, Sheldon is not afraid to ask difficult questions and even question adults, including his parents and his teachers. This may not endear him to some of the people in his school and around town, but his family knows that this is just one of his lovable quirks.

4. He has no filter
Sheldon is never afraid to speak his mind. Pointing out mistakes, correcting fallacies, and even pointing out minor infractions against his school’s dress code. To many of his peers this may make Sheldon a weasel, but this strong moral code makes Sheldon a person that we should all emulate.

5. He’s warm and caring towards his family
Even if he is a germaphobe, Sheldon always expresses how much he loves his family, especially in times when they need his support. He overcomes all of his fears just to show how much he values them. And that makes him Young Sheldon really special.

Get to know more about Young Sheldon on Tuesday, September 26 when its first episode airs only on Warner TV, channel 235 on Cignal and channel 34 on SkyCable before going on a quick break. The show will return on Friday, November 3, right after exclusive new episodes of The Big Bang Theory.