BIOSTAR announces their RACING line of motherboards for AMD RYZEN

amd28 amd ryzen8 biostar6 gaming motherboard7 motherboard8
BIOSTAR has announced their new RACING line of motherboards with support for the upcoming AMD RYZEN. The lineup consists of the X370GT7, X370GT5, and...

BIOSTAR has recently released their Z270 RACING series of motherboards. The said line supports Intel’s 7th generation (Kaby Lake) processors. While Intel has dominated the CPU space for quite some time now, AMD is looking to fight back with RYZEN. And BIOSTAR has a new RACING line of motherboards that support AMD’s upcoming RYZEN. 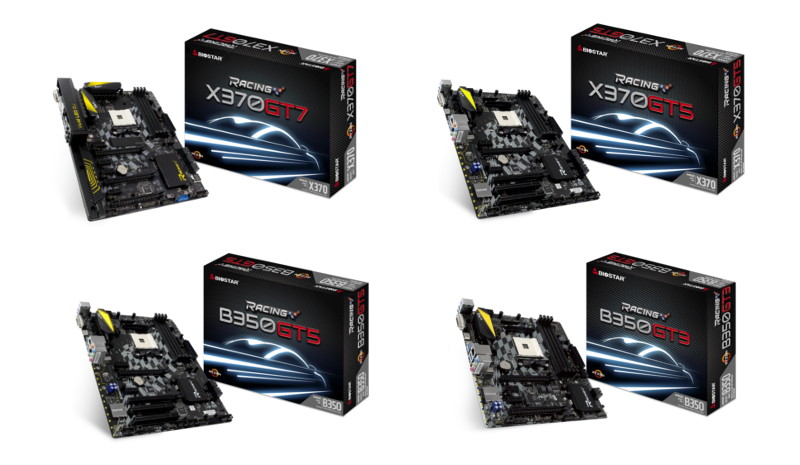 BIOSTAR is proud to announce the newest entry in its RACING Series family of high-performance motherboard with its debut entry for AMD with the BIOSTAR RACING X370 and B350 motherboard line up. Featuring the latest 2nd-generation RACING Series technology, the race to the future has just become more intense with support for the new AMD RYZEN processors. True to the legacy of the BIOSTAR RACING series, the new motherboards for the Super 5 concept as well as the BIOSTAR’s revolutionary VIVID LED Armor and 5050 LED Fun Zone.

The flagship AM4 motherboard for the AMD RACING Series lineup supporting AMD RYZEN processors, the BIOSTAR RACING X370GT7 features all the best technologies from the RACING Series. Featuring support for AMD Socket AM4 processors and up to the latest DDR4 memory, the X370GT7 is the next-level of AMD platform performance. Exclusive to the BIOSTAR RACING series boards, the X370GT7 features M.2 Cooling Protection for optimal performance of SSDs in the most intense situations.

Joining the family of RACING Series boards is the RACING X370GT5 / RACING B350GT5 featuring the stylish VIVID LED Armor as well as the 5050 LED Fun Zone allowing gamers and enthusiasts to fully customize and tailor their rigs for their personal style.

As with the other BIOSTAR RACING motherboards, the X370GT7 is bundled with a copy of World of Tanks, along with a 240GB BIOSTAR M200 SSD.