When building gaming PCs, much emphasis is placed on the highest-end GPUs and CPUs. Some tend to focus on displays with the highest refresh rates, or peripherals suited for their games of choice. Though an often-overlooked component in building PCs is the motherboard. Gaming PCs need high-performance motherboards too, and BIOSTAR’s RACING Z270GT9 is one worth looking into. 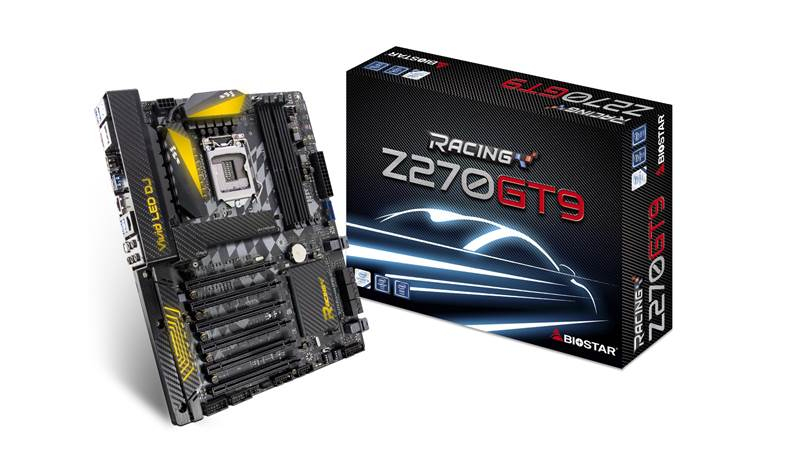 BIOSTAR has announced its latest motherboard supporting the 7th-generation of Intel Core series processors, the BIOSTAR RACING Z270GT9. Featuring the latest Intel Z270 chipset, this motherboard supports LGA1151 processors for the latest in performance and power as well as the best features including support for DDR4-3600+ high-speed memory, six PCI-E x16 3.0 slots, and two USB 3.1 (TYPE A+C) ports amongst others.

Built upon reliability, the new BIOSTAR RACING Z270GT9 features enhanced endurance and stability under intense conditions which is a great advantage for gamers thanks to its improved power design named Digital Power+ which features IR digital PWM controller and PowIRstage IC which offer excellent stability and voltage delivery whilst operating cooler and more reliable under load than competing designs. The BIOSTAR RACING Z270GT9 features 14-phase power design complimented with all solid capacitors for a stable overclocking experience.

To compliment the performance of this motherboard, BIOSTAR is also proud to be the first its special bundle for upgraders, enthusiasts and system builders upgrading to the new Intel 200-series platform which brings support for Intel’s new Optane technology. Buy BIOSTAR Z270GT8 or Z270GT9 get Intel 600p series SSD, the latest storage technology from Intel running on PCI-Express Gen3 x4 speeds for unrivaled speeds versus traditional mechanical hard drives. BIOSTAR is offering this introductory promotion for everyone to experience the power of the new Intel platform offering incredibly amazing performance and great value together with BIOSTAR motherboards.