CryptoMining is Back? ASUS Partners With Quantumcloud

asus107 cryptocurrency2 cryptomining1 gadgets238 gaming hardware10 mining1 news158 quantumcloud1
Back in 2017, cryptocurrency mining became a trend that combined computer hardware and finance into what looked to be the true form of currency...

Back in 2017, cryptocurrency mining became a trend that combined computer hardware and finance into what looked to be the true form of currency for the digital age. Many groups and companies were formed, all to “mine” different kinds of these electronic currencies, with bitcoin being the most popular. A lot of industries tried to ease their way into the trend, with cafes and restaurants even setting up payment options via bitcoin or other cryptocurrencies.

How did you mine for bitcoin? Well, the short of it is you use the processor in your video card to compute for solutions to a finite number of digitally-generated equations. Don’t worry about the math, you won’t need to learn it because it’s your GPU that’s doing all the solving anyway. After it has solved an equation, or is part of the group of GPUs that solved the equation, your account is awarded with a portion of a bitcoin. The process repeats and that’s how bitcoin is mined. This led to a mining craze, with an actual shortage of video cards available to mainstream consumers and drove up the prices of computer hardware, with GPUs and RAM chips experiencing the most price gain.

But that feverish race to mine the most bitcoin has subsided somewhat, and the speculation market has since quieted down. Has the cryptocurrency bubble popped? Some would say yes, but there are others who still have a possible way even for gamers to passively gain income from this virtual currency. 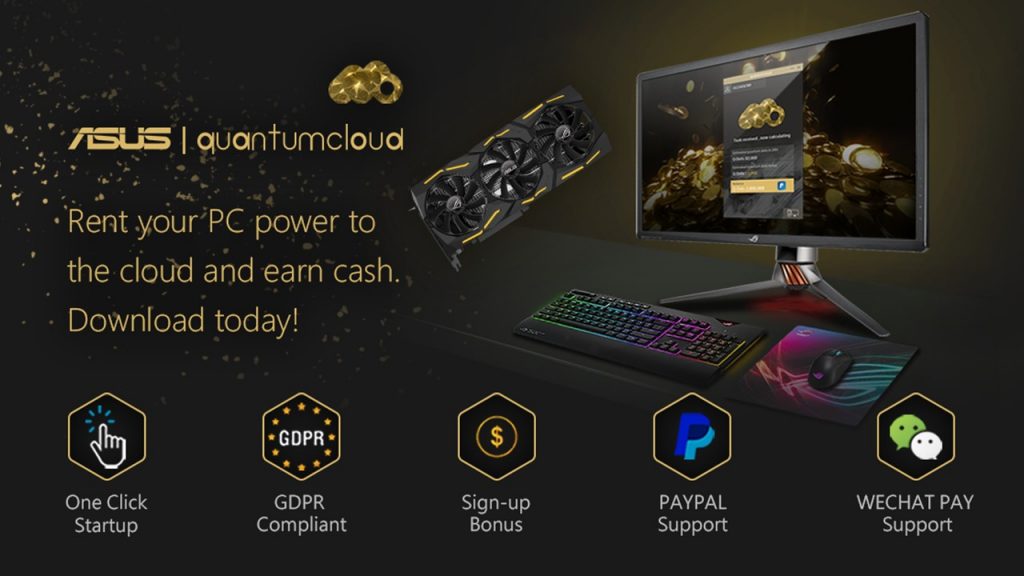 ASUS has announced its partnership with Quantumcloud, a startup company specializing in cloud-based computing and cryptocurrency mining. Quantumcloud is an app that helps its customers mine cryptocurrency via their video cards, is safe, and relatively easy to use. ASUS brings its heavyweight graphics cards to this team-up, ensuring the best possible components and enjoys a high number of users.

But how does it work?

People who buy ASUS graphics cards can access the Quantumcloud app and basically have their GPU mine as they use it or they also have the possibility of others use their video card to mine. When it comes to mining, the more GPUs working in conjunction, the more BitCoin or currency they can collect. Thanks to cloud computing, linking multiple cards together despite physical distance is possible. NVIDIA had released a similar service in 2017 called GeForce NOW, which enabled users with low-end PCs to be able to game on better graphics cards via access to NVIDIA’s cloud servers. In a way, you use the cloud to connect your PC to an NVIDIA GeForce 1080 (at the time of announcement, the best GPU the company had) and play games without latency.

For safety, Quantumcloud offers secure transactions via PayPal or WeChat, and has the strictest General Data Protection Regulation (GDPR) Compliance protection for all user data. To simplify the user experience, digital wallet management, cryptocurrency mining mix, currency conversions, and fiat transfers are all integrated into the back-end of the Quantumcloud software.

There’s no actual word on when ASUS will be deploying this service, or if there are perks for buying “ASUSxQuantumcloud”-branded video cards if ever, but if users do get on-board with the idea of idle mining through the cloud, this could spell the more conservative return of cryptocurrency mining and may open the phenomenon to more people.

Do note that cryptomining is not a simple task. Please do observe due dilligence and do extensive research about this topic before engaging in it for yourself.