Hearthstone’s newest expansion, Ashes of Outland up for pre-purchase

Ashes of Outland, Hearthstone’s next expansion and the first in the Year of the Phoenix, brings Blizzard’s smash hit digital card game to the shattered and war-torn world of 2007’s World of Warcraft: The Burning Crusade. The legendary Illidan Stormrage, self-proclaimed Lord of Outland, stands along with his cabal of Demon Hunters against the hazards of this broken world. Gangs of raiders and demons scour the land clad in scrap iron armor, assailing the scattered pockets of civilization—including those taking refuge in the slums of the once-proud Shattrath City. Prepare to take a stand alongside Illidan as one of the last Demon Hunters when Ashes of Outland launches April 8. 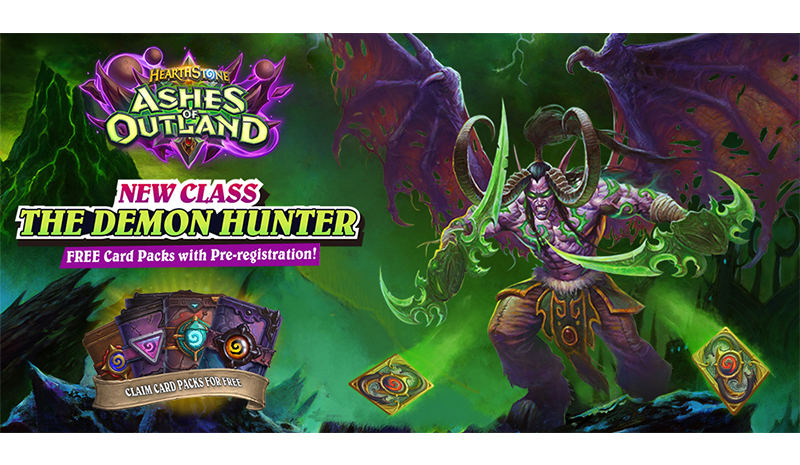 NEW CLASS: DEMON HUNTER
Are you prepared? The Year of the Phoenix will introduce Hearthstone’s first new class since launch: The Demon Hunter. Driven by fury and vengeance, the Demon Hunter excels at unbridled aggression, exemplified by its Hero Power Demon Claws, a one mana-cost single-turn boost to the hero’s Attack, designed around robust synergies with its class cards. Demon Hunters also have access to cards with the Outcast keyword, which become more powerful when played from the right- or leftmost position of your hand. 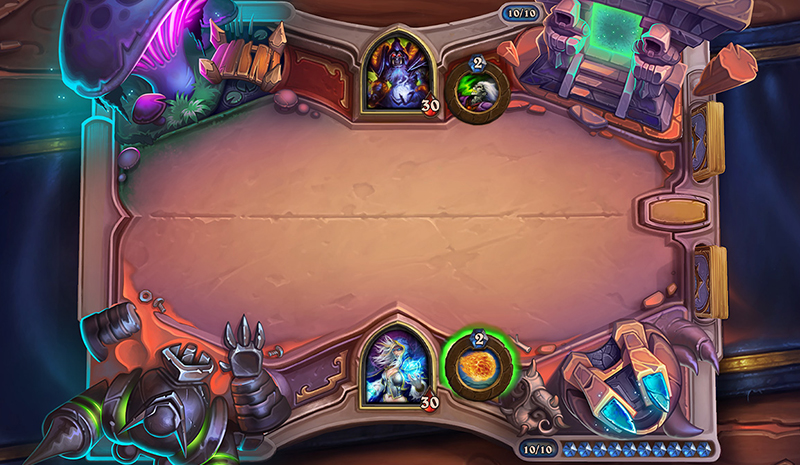 The Demon Hunter is a full-fledged, permanent class free for all Hearthstone players who complete the Demon Hunter Prologue missions, which retells Illidan Stormrage’s origin story from his perspective and with a Hearthstone twist. Players will also receive, free, all 10 Demon Hunter Basic cards, as well as a 20-card Demon Hunter Starter set. Starting with Ashes of Outland, players can expand their collections with 15 new Demon Hunter cards, with 45 in total being planned for the Year of the Phoenix across the year’s upcoming three expansions. 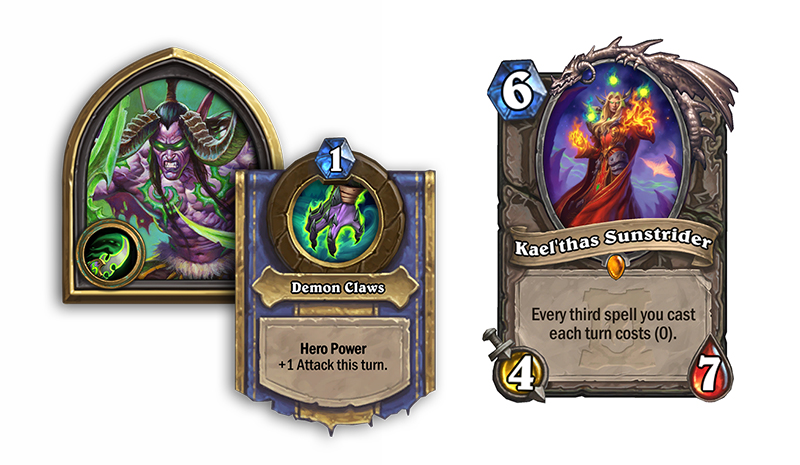 PRIME LEGENDARY MINIONS ENTER THE FRAY
New to Ashes of Outland, Primes are powerful minions who shuffle a vastly-upgraded version of themselves back into your deck when they’re taken off the board. Every class save the Demon Hunter has its own unique Prime, like the Warrior minion Kargath Bladefist. An aggressive 4 mana 4/4 with Rush in his starting form, Kargath upgrades into Kargath Prime, an 8 mana 10/10 with Rush, who grants you 10 armor whenever he kills an enemy minion.

BEWARE OF PRISON BREAKS
Ashes of Outland also introduces Imprisoned Demons, who come into play “dormant” for two turns. Initially unable to attack and impervious to any threats, these powerful minions unleash tempo-shifting effects once they’re activated, with the potential to swing the outcome of a match. Kael’thas Sunstrider, a Legendary neutral minion, will enter Hearthstone a month early! All players can log in on March 18 to receive the Lord of the Blood Elves and harness his unique power—with Kael’thas in play, your third spell every turn is free.

Ashes of Outland is available for pre-purchase now through April 7 from the Blizzard Shop. As a pre-purchase bonus, players will receive the Serpentine Card Back and a random Golden Legendary from Ashes of Outland. The Mega Bundle includes the new Lady Vashj Shaman Hero, and other additional bonuses. Visit the official site for more info.