Marvel vs. Capcom: Infinite is shaping up to be a fighting game both newbies and hardcore fans can enjoy

capcom3 fgc2 fighting game1 fighting game community1 fighting games12 marvel vs capcom infinite2 marvel vs. capcom1
We got a chance to try out Capcom's upcoming title Marvel vs Capcom: Infinite, and it's looking to be a great game for those...

Fighting games have always had this reputation as a game genre that’s tough to get into. It does make sense, given that fighting games require great mechanical skill to play at a high level; even playing them at a decent level requires time and practice. Of course, if you’re new to the genre you can still have fun by randomly button mashing when facing-off against equally unskilled opponents, but surely there isn’t much satisfaction in that is there. 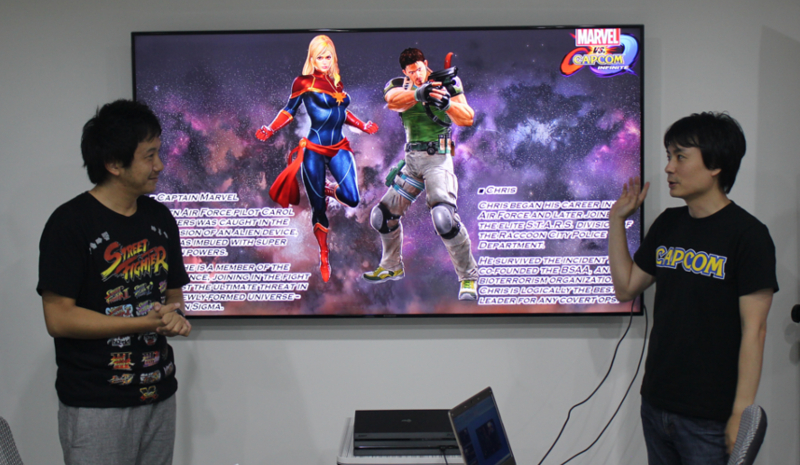 Capcom seems to have taken notice of this while developing their upcoming fighting game Marvel vs. Capcom: Infinite, as they’ve added several features that will make the game more accessible to casual fans and newbies to the genre. I got a chance to try these features out last August 9, as Capcom Promotions Producer Tomoaki Ayano and Assistant Producer Kansuke Sakurai flew into the Philippines to present and demo Infinite. As someone who’s bad at fighting games, I can confidently say that the game is fun! 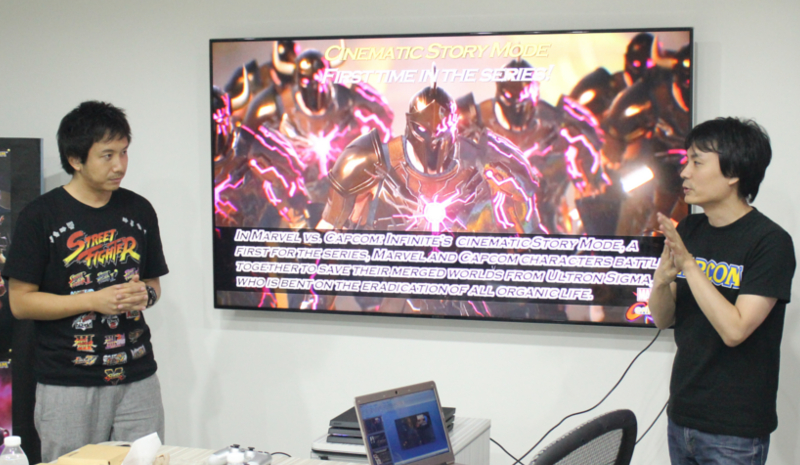 If you aren’t familiar with the game, Marvel vs. Capcom: Infinite is the latest installment in Capcom’s long-running Marvel vs. Capcom series; with the last major title in the series being Ultimate Marvel vs. Capcom 3 released last 2011. In the six years between installments, Marvel’s heroes exploded in popularity, thanks to the Marvel Cinematic Universe. Because of the MCU’s success, Infinite’s story is taking some cues from it as the game will feature a Cinematic Story Mode, a first for the series. Speaking of story, it’ll be about the heroes from Marvel and Capcom fighting against Ultron Sigma, who is as you guessed the fusion of Marvel’s Ultron and Mega Man’s Sigma. 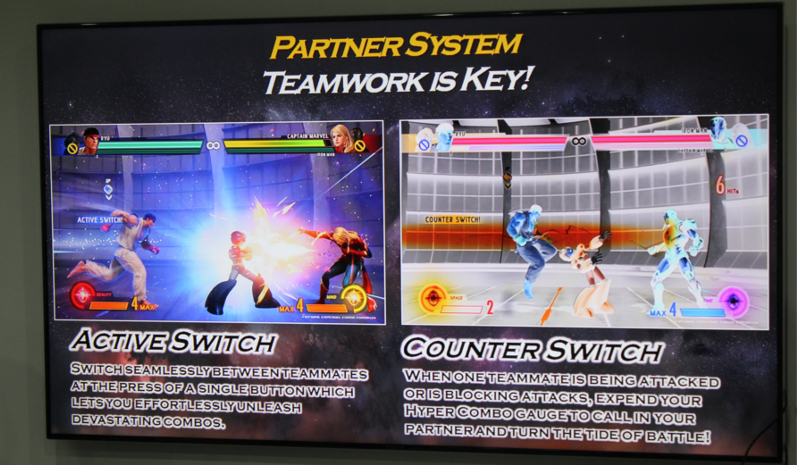 After introducing some of the characters in the roster, the producers dived straight into highlighting gameplay features. The first thing they talked about was the Switch system. Players can switch seamlessly between their two chosen characters, which enables unique combos. Another feature in the system is Counter Switching, where players can expend their hyper combo gauge to counter enemy attacks and combos. 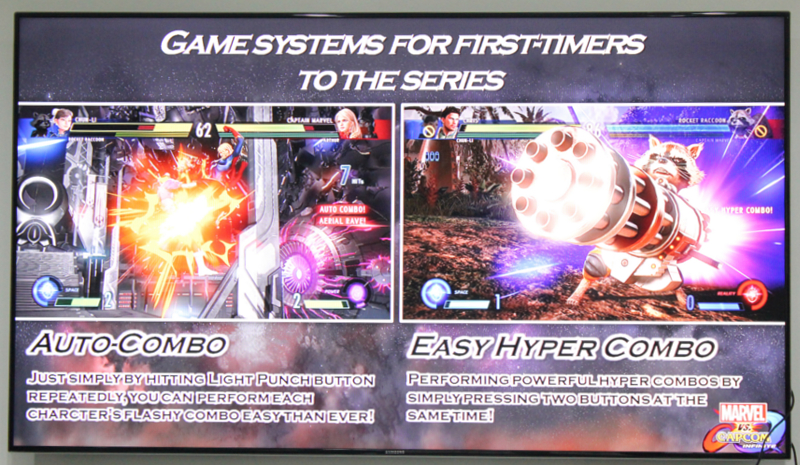 As said earlier, Infinite has new features to make it more accessible for casual fans and newbies; and they are the Auto-Combo and Easy Hyper Combo features. Auto-Combo enables players to perform a flashy combo by just mashing the light punch button. While Easy Hyper Combo is activated by pressing heavy punch and heavy kick.

In previous games, pulling of combos like these require memorizing steps and impeccable timing, now players can pull them off much more easily. Though before you call out Capcom for making the game too easy, these features can be turned off for one or both players; this means you can even the playing field when playing with a more experienced player or vice versa. 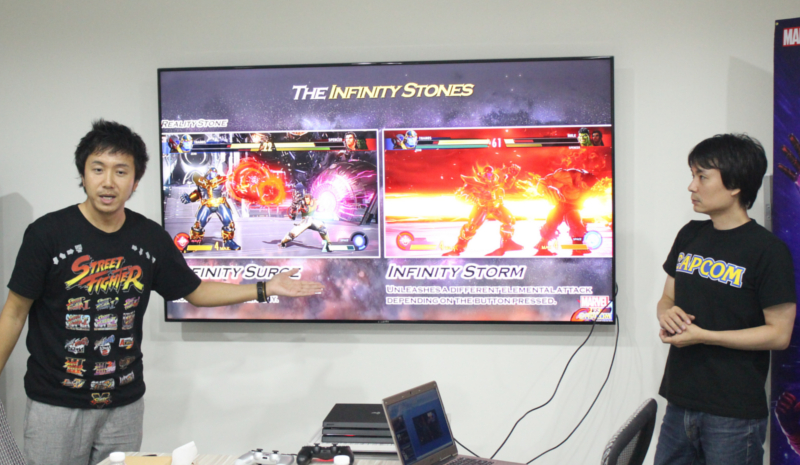 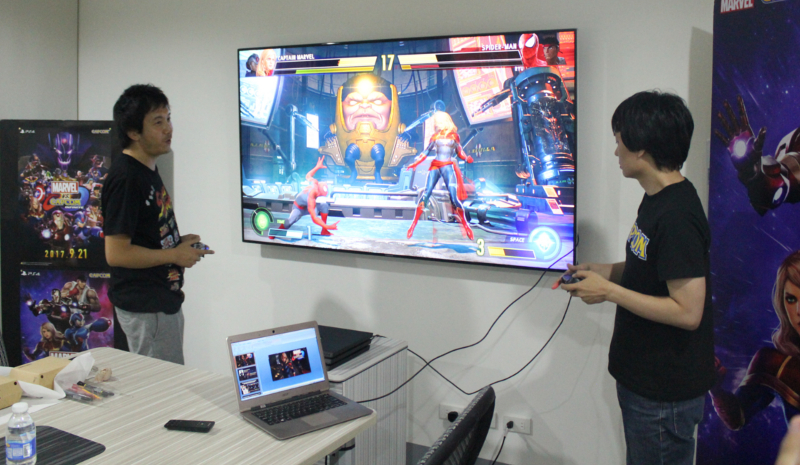 After running through Infinite’s features, the producers handed us the controllers to have a go at the game. The inclusion of Auto-Combo and Easy Hyper Combo meant that even in my limited fighting game experience, I was able to combo successfully (I even won a match), though I still had to time my attacks well. The fighting system with all the features result in a fighting game with depth and complexity, but one that is much easier to pick up and play. 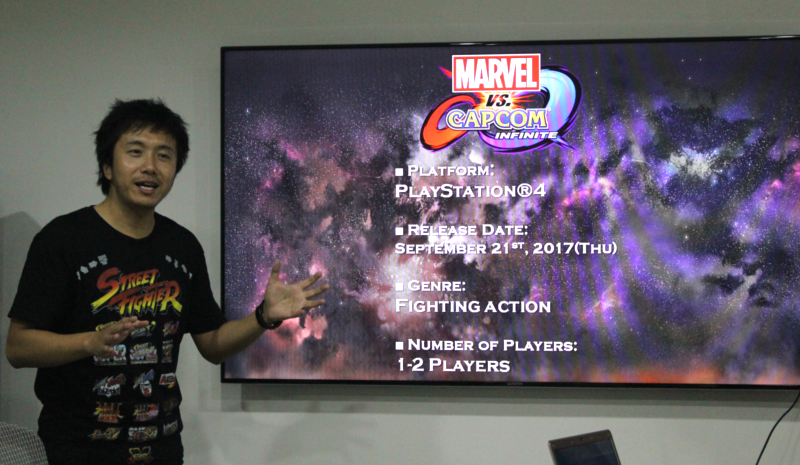 While it’s too early to tell as to  how Marvel vs. Capcom: Infinite will be received by hardcore fighting game players, it’s undoubtedly a game to watch out. Infinite will be released this September 21, 2017 for the PS4, PC, and Xbox One.