Overwatch is quickly becoming an eSport to watch out for. Having been released just last May of this year, Overwatch has garnered a large playerbase, along with a lively esports scene. While there are some talks regarding Overwatch’s competitive balance issues, this has not stopped different tournaments from cropping up. One such tournament is the upcoming MGA 2016 Championship, presented by MSI to be held at London this December 7-8th. The team lineup for the tournament is now complete. 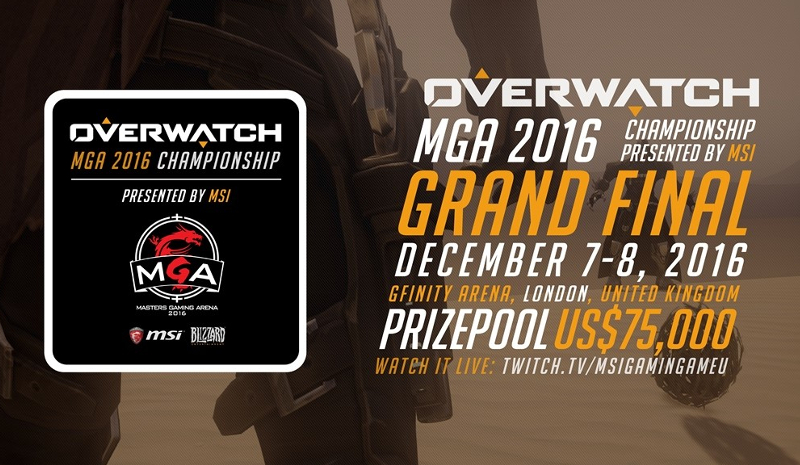 After nearly one month of head-to-head competition since early October at the MSI MGA 2016 Regional Finals, the top three teams advancing to the Grand Finals are: Rise Nation from Americas, Ninjas in Pyjamas from Europe, and KongDoo Panthera from Asia. Additionally, Fnatic will be joining these regional winners to compete in the Grand Finals at Gfinity Arena, London, on December 7, 2016 for the Championship of MGA 2016.

The North American champion “Rise Nation” (formerly “Gecko OW”) was formed on August 27, 2016. Most of its members are former Counter-Strike: Global Offensive players. Although they experienced some ups and downs as they tried to adapt to Overwatch’s gameplay in early stages, they were able to win all the matches and 2-0’ed their opponents during the Americas Regional Finals.

The European champion “Ninjas in Pyjamas” is a pure Swedish team. Two of its members, Zuppehw and Zappis, are also popular live-stream casters as well as top rankers of the game in Europe. Ninjas in Pyjamas only lost one point during the entire Europe Regional Finals in its match against “Misfits.” Against all other opponents, they showed incredible dominance and tactical capabilities.

Finatic is a leading European eSports organization established in 2004 with professioon teams in all popular games such as Counter-Strike: Global Offensive, Dota 2, Hearthstone, League of Legends, Overwatch, and more. Fnatic will be the invited guest to compete with other regional winners for the Championship in the Grand Finals of MSI MGA 2016.

The final champion of MGA 2016 will walk away with a US$40,000 cash prize. Second place, third place, and fourth place will be awarded US$20,000, US$10,000, and US$5,000, respectively. The Grand Finals will be broadcast live on Twitch by MSI at: https://www.twitch.tv/msigamingameu. Don’t miss out on the chance to enjoy the live event at the arena or online.