Bastion has always been a topic of talk in the Overwatch community. Love him or hate him, the peace-loving robot with a bird companion has secured his place in memes.

Overwatch Lead Developer Jeff Kaplan hinted at possible changes to D.Va’s Defense Matrix (a possible response to her nerf), but this piece of news caught us completely off-guard: Bastion’s getting a kit revamp that will go live on PTR very soon. 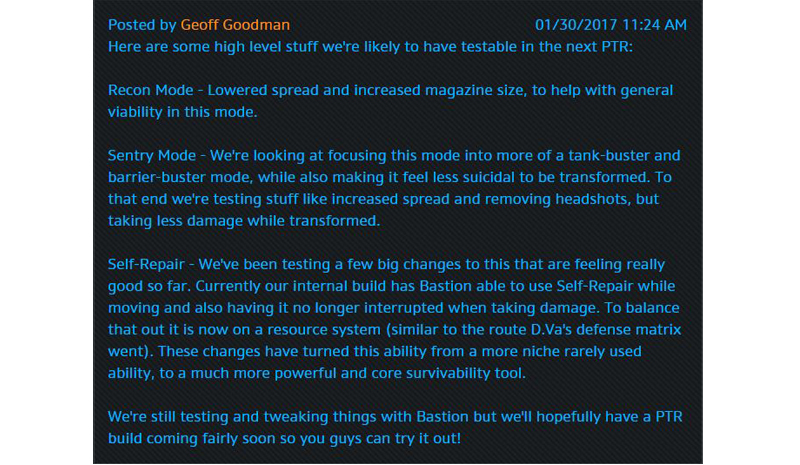 It was Geoff Goodman who broke the news over at the official Overwatch forums, and the changes to Bastion’s abilities might make him viable in the upcoming meta again. First off, Recon Mode (the non-turret mode) gets a few tweaks, lessening the rifle’s spread and increasing ammo capacity. These two changes will help Bastion players contribute to the offensive effort while looking for another place to perch.

Bastion’s Sentry or turret mode has increased spread but also increased durability. This means that turret mode has no more headshot bonus, but can easily chew through shields and tanks, thanks to the bullet spread hitting big targets, like Reinhardt’s shield. His proposed increased survivability in turret mode should keep him blasting on targets a little longer, which can spell the difference between a successful defense or a successful push by the enemy team. Bastion still retains his headshot hitbox though, located at the back of the turret.

Perhaps the biggest change is to Bastion’s Self-Repair. It can now heal while moving, and won’t be interrupted by damage. This means that you can shoot, move, and heal all at the same time, making Bastion a deadlier hero to deal with. The heal on a resource mechanic like D.Va’s Defense Matrix is a good trade-off, so Bastion can’t heal indefinitely.

We now live in a meta where triple tank is no more, thanks to D.Va’s nerf, and it seems like it will shift back to a more DPS-focused team, with Reaper players getting Bastion as a sort of tank buster option. We think Bastion’s changes will make him a good pick on defense, but would also find a niche with players who like to hunt and flank.

For now, the revamped Bastion will be available first on the PTR servers and will probably stay there for a few patch cycles.