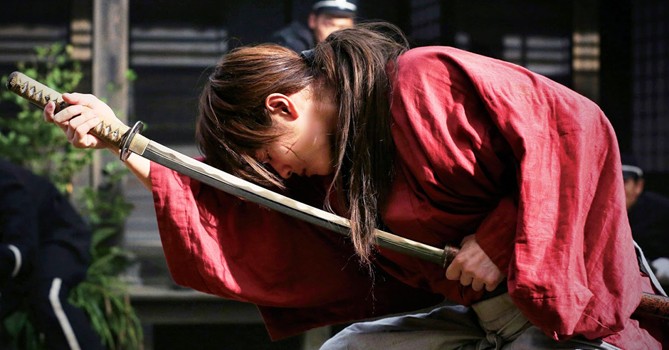 anime11 emi takei2 manga5 munetaka aoki2 reviews47 rurouni kenshin: kyoto inferno1 rurouni kenshin: the legend ends1 takeru satoh2
The follow-up to the Rurouni Kenshin franchise sets the stage for an explosive showdown. But was it explosive enough for people to buy into...

The follow-up to the Rurouni Kenshin franchise sets the stage for an explosive showdown. But was it explosive enough for people to buy into the hype? Check out our review!

Local fans of the well-known manga franchise exploded during the red carpet premiere of Rurouni Kenshin: Kyoto Inferno when Takeru Satoh, Emi Takei, Munetaka Aoki, and Keishi Otomo did a two-day meet-and-greet session. Before we go into the review, check out our photoset of day 1 of their visit here.

A good sequel should have a few elements. First, it has to make the story and the cast members mature. Second, it has expand the world the characters inhabit. Third, it should be able to take the bar set by its predecessor a notch higher. Rurouni Kenshin: Kyoto Inferno is one such sequel, as it delivers on all levels and much more.

The movie takes place some time after the events of the first movie. Kenshin Himura (Takeru Satoh) has adjusted well to life in Kaoru Kamiya‘s (Emi Takei) dojo as well as his community and friends, notably Sanosuke Sagara (Munetaka Aoki). A ghost from his past in the form of Shishio Makoto (Tatsuya Fujiwara), however, threatens to shatter not only the idyllic life he has made, but all of Japan as well.

The struggle to change for the better has always been at the heart of the franchise, but for Kyoto Inferno, it’s not just Kenshin who tries to break free of his past. His friends and allies all must make the decision to share in his burden of forging a better future and that maturity clearly shows in Kyoto Inferno.

In the first movie, we are introduced to Kenshin and his gang. This time, the cast gains a few new allies and enemies, which fans are going to enjoy seeing in the big screen. Kyoto Inferno firmly establishes director Keishi Otomo’s vision: this is not a simple retelling of the manga, evidenced by rearranging character introductions and plot points. Despite this, the characters and story remain true to the spirit of the manga and anime fans have grown to love all these years. When it comes to meeting fan expectations, Kyoto Inferno not only does this in a style all its own, but sets its own bar even higher. Kenshin’s almost-superhuman speed and swordsmanship are laid out in full glory, while still being believable enough to be “realistic”. We’re taken back to Meiji-era Japan all over again, complete with colorful lanterns and kimonos framed against the gritty and dusty streets not yet paved with cement. We’re also given a glimpse of how the affluent live versus how a village ravaged by a madman plunderer tries to move on past the tragedy. It all seems very real and very powerful, one can’t help but get goosebumps.

Rurouni Kenshin: Kyoto Inferno delivers on all fronts that make it a worthy sequel to the first movie. Fans, both casual and hardcore, will find something nostalgic about the movie, with an ending that’s a both a satisfying reveal and a cliffhanger, with everything coming together for the climax that will happen in Rurouni Kenshin: The Legend Ends.