The SEGA Genesis Mini Is Coming This September

This is not a drill. Epicsoft Asia Pte. Ltd. has just announced that the SEGA Genesis Mini will indeed be arriving on our shores. Details of an actual local retail partner are not yet released right now, but what we do know is that the kit will be launched in the Philippines on September 19, 2019 with a price tag of P4,500.

The box will include the SEGA Genesis Mini console, which is around 55% smaller than the original but still has the same look of the 16-bit machine that we love. It also comes with replica ports for that retro feel and sliding volume control. Like the old Genesis, the Mini will come with two controllers (with USB ports), HDMI cable, and power cable. 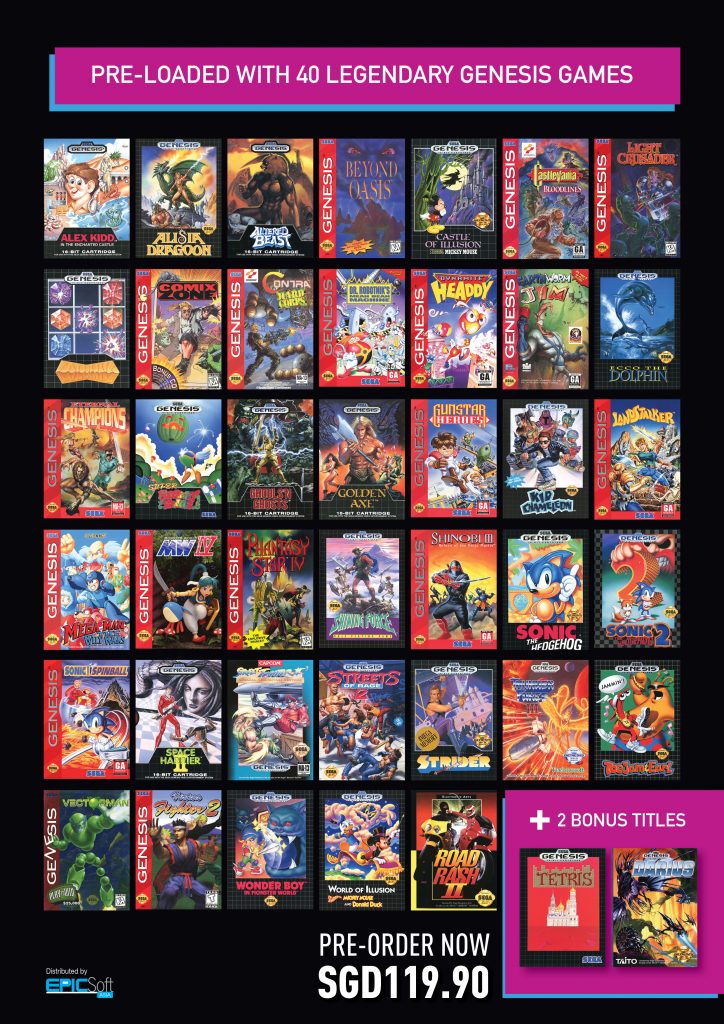 The best part: the console will come pre-loaded with 42 classic games that were developed originally for the SEGA Genesis, including:

In short, the Mini has ALL the games we grew up playing on the original console. ALL OF THEM.

The release of this console is significant for SEGA, which gave birth to game characters like Sonic the Hedgehog© during the 16-bit era. SEGA Games Company Ltd. Executive Manager Miyazaki Hiroyuki said,  “I am really excited to have the opportunity to launch the SEGA Genesis Mini in Asia. SEGA Genesis Mini is not only a game console, but also brings back great memories of SEGA’s history. I hope every Genesis fan, SEGA fan and gamers in general can love this new retro game machine.”

Pre-orders have started for this product at all retail partner outlets in the Southeast Asia region, while online pre-orders will be made available closer to the date of the launch. The SEGA Genesis Mini recently made headlines at the annual E3 gaming trade event in Los Angeles USA, where it was available for hands-on previews by the attending guests and media.

As a kid, I remember being asked to pick a console for Christmas: the Super Nintendo or the SEGA Genesis. These two consoles were THE cutting edge of home gaming back then (16-bit!), and when I saw that Sonic The Hedgehog was exclusively on the SEGA side, the choice was easy. Saving game progress was not an option back then, but this time around, picking up where you left off from games like Altered Beasts and Streets of Rage will be easier.

If you’re already thinking this early for a Christmas gift for your loved one who grew up in the 90’s, the SEGA Genesis Mini should definitely be at the top of your list!