This year, OPPO has already released three phones – the F3, F3 Plus, and the A57. While it’s the F3 that’s stealing the show, thanks to its dual selfie camera and great sales, the A57 looks to be a decent contender too. With its 16MP front camera and Qualcomm Snapdragon 435 SoC, it looks to be the smartphone of choice for selfie fans looking for a more budget-friendly midranger. But is it a great phone overall? And how does in run compared to the similarly priced OPPO F1s? Here’s our review of the OPPO A57. 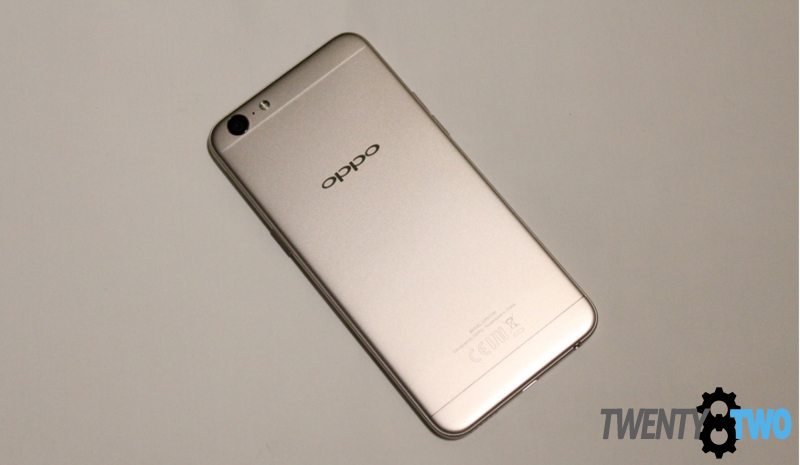 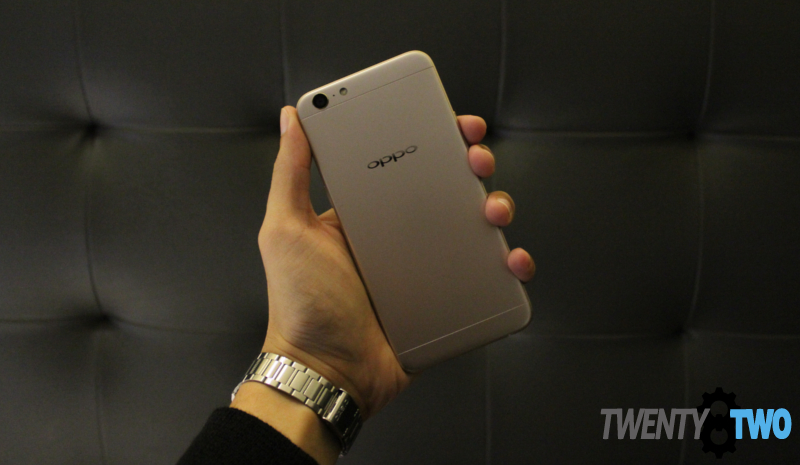 Since they started styling their phones with iPhone-like design cues, OPPO has not strayed away from the style until now; seeing as the A57 still looks very much like other phones in OPPO’s range. Not that it’s badly styled as the A57 is still a nicely designed phone, it just won’t stand out from all other OPPO phones (unlike the more striking F3 Plus with its triple antenna bands). 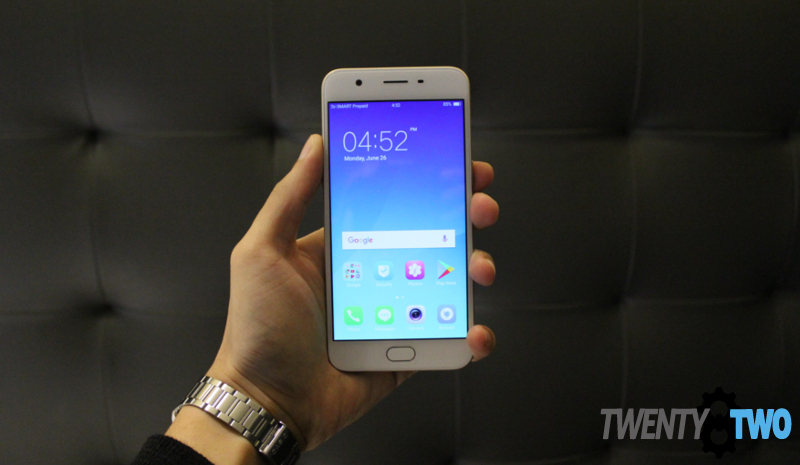 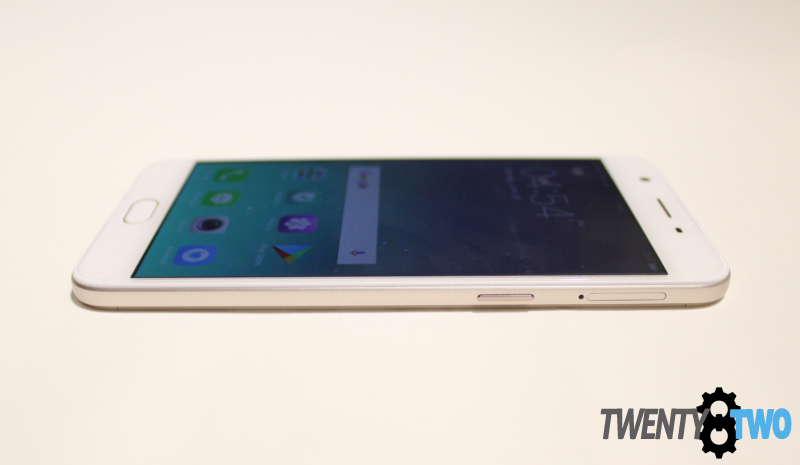 The right side of the phone has the power button, as well as the SIM/microSD card tray. Good thing about the A57 is that it supports two SIMs as well as a microSD card, unlike most phones with hybrid slots. 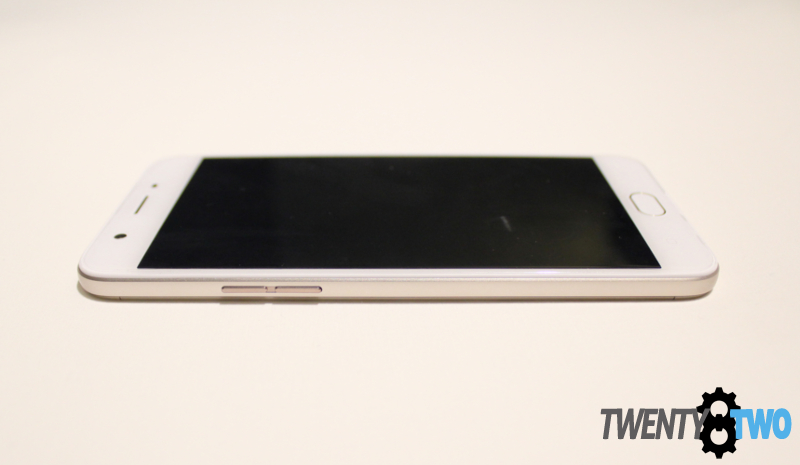 On the left are the volume rockers. 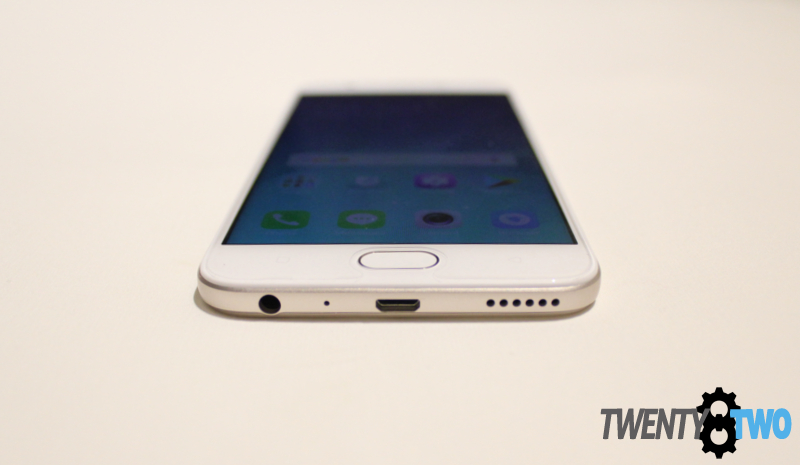 And below are the 3.5mm headphone jack, the micro USB slot, and the speakers. 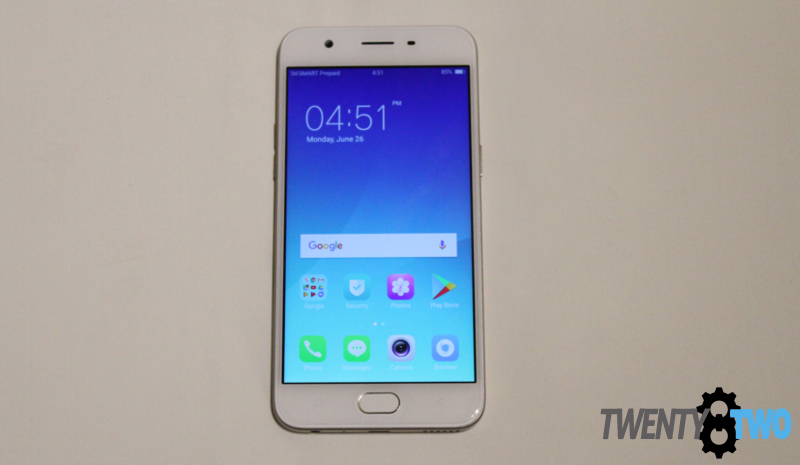 Overall, the OPPO A57 is designed as expected from any OPPO phone. It’s not as premium feeling as its higher end (and more expensive) F3 and F3 Plus siblings. Though it does slot in nicely with last year’s F1s and A39 models.

The A57 sports a 5.2-inch display with a 720×1280 resolution. The phone’s 720p screen is sure to be a disappointment to some, as 1080p is often seen as the standard resolution for phones nowadays. Though as we have often iterated in our reviews, a 720p resolution for 5.5-inch screens and below should be fine for most regular users. 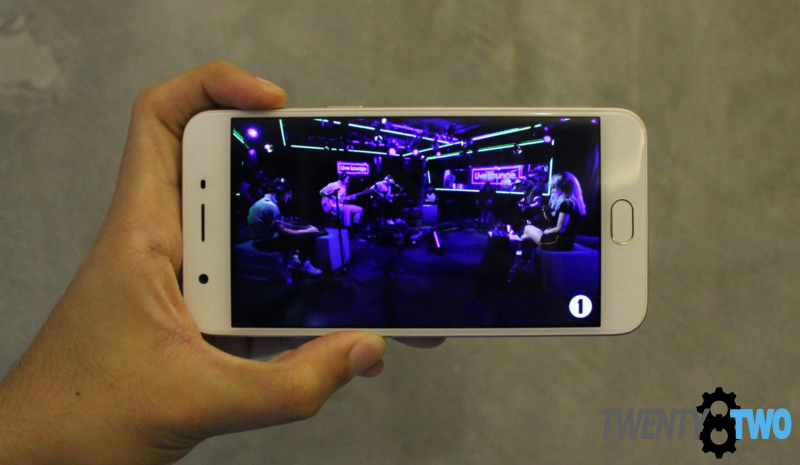 While the resolution should be fine enough, the A57’s display won’t wow viewers when watching videos and such (compared to more vibrant AMOLED displays). But again, it’s far from a bad display as it should still be fine for general media consumption.

Sound quality meanwhile, is on par with the F1s. A slightly bass-heavy sound signature is again present when used with headphones, and the speakers are serviceable but not the loudest. Dirac Sound is found in the A57, which we recommend turning off for a more neutral sound; unless of course you prefer lots of bass, then by all means keep it on. 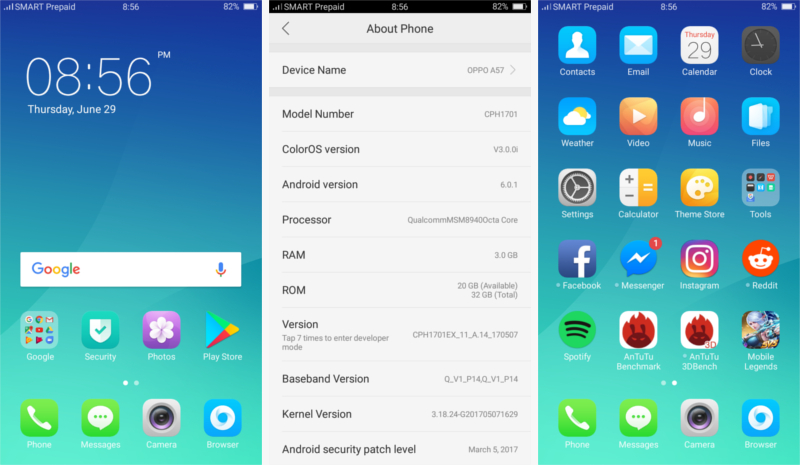 The OPPO A57 runs on ColorOS 3.0 based on Android v6.0 Marshmallow. It’s practically the same OS found in the F3 line, as it’s based on Marshmallow instead of the Lollipop version for the F1s and other models of last year. Good points of ColorOS includes the minimal to no amount of bloatware, as well as being easy to use. Not so good points are the lack of updates (with no Nougat update in sight for the near future). 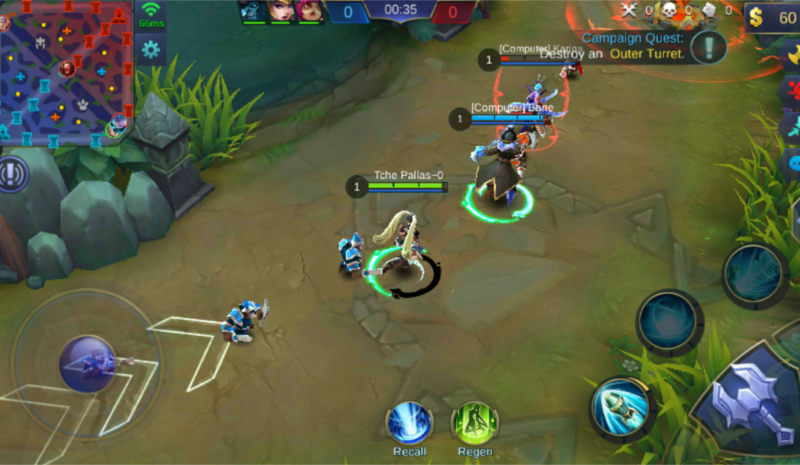 Performance-wise, the A57 performs decently. It’s far from a powerhouse, but it’s Snapdragon 435 gives it a slight edge over similarly priced phones with Snapdragon 430s and Mediatek processors. It won’t run the most demanding games fluently, but popular titles such as Mobile Legends will  play just fine. Day-to-day performance is also good for the most part, though there are some slowdowns from time to time (which is not a deal breaker at the phone’s price point). 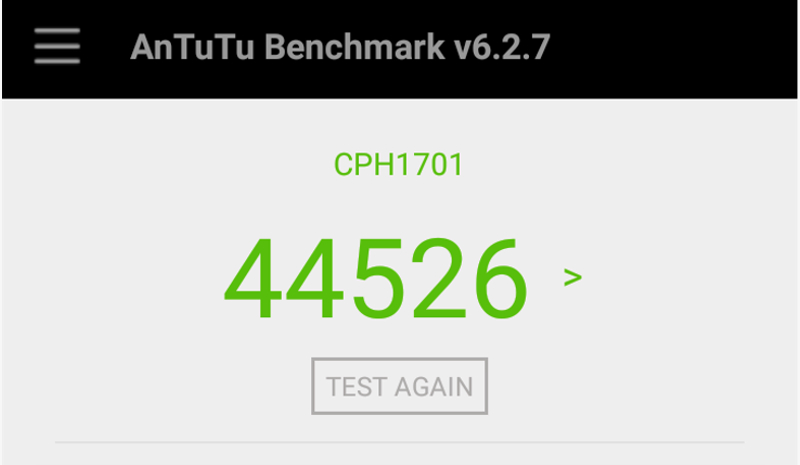 On the AnTuTu benchmark, the A57 scored 44526 points, as expected from a Snapdragon 435 powered smartphone.

Packed with a 13 MP rear camera, the A57 looks to have the same (or nearly the same) shooter as the F1s. As expected, the images it produces are comparable to the F1s, but slightly better. 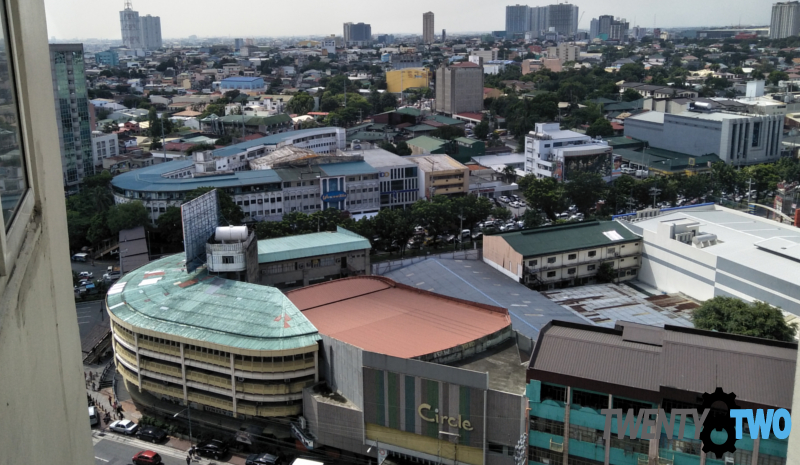 Photos taken with ample amounts of natural light turn out nice and detailed. 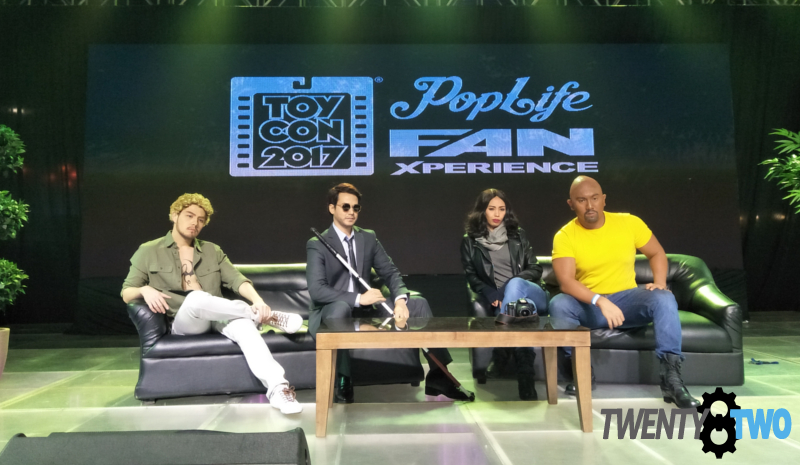 Well-lit indoor environments are also not a problem for the A57, as images taken are still good. 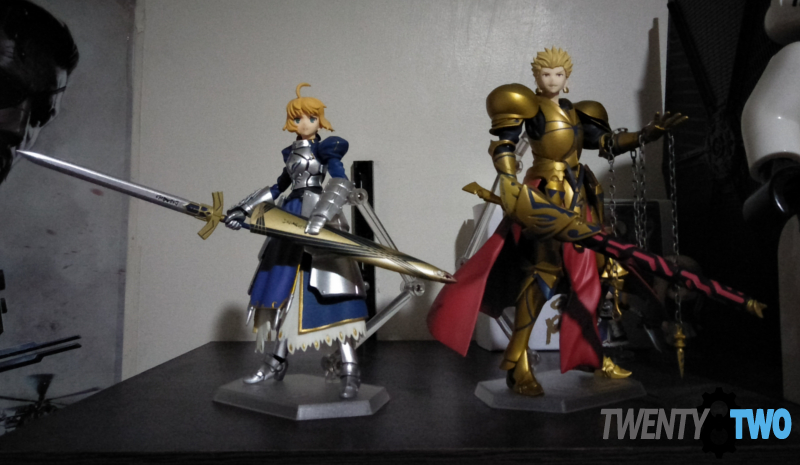 The A57 even manages to keep good detail in shots taken in less than stellar lighting conditions. 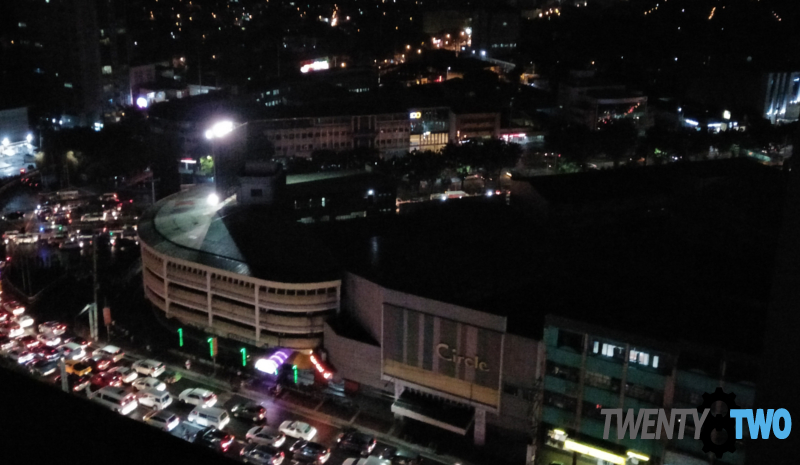 Though it does struggle in lower light situations, as pictures turn out rather soft and grainy. Not surprising as the A57 is not a high-end phone, though it does perform better in these situations than the F1s. 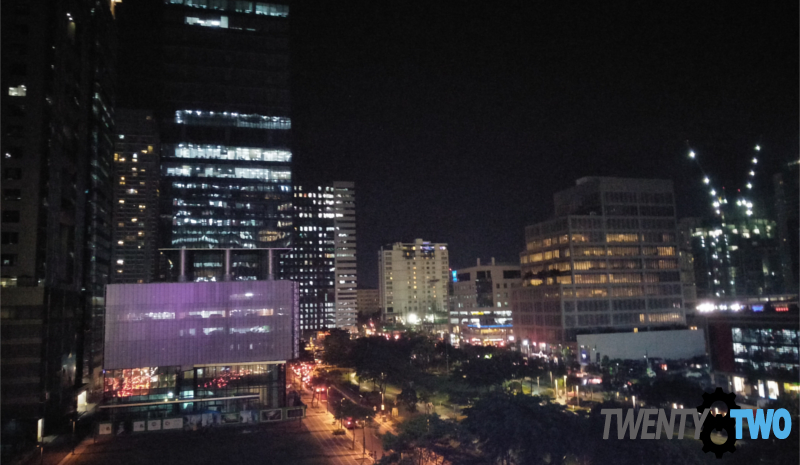 Overall, the rear camera performance of the A57 is pretty good. It’s a bit of an improvement over the F1s in most situations. Though in typical OPPO fashion, the phone shines when used to take selfies. 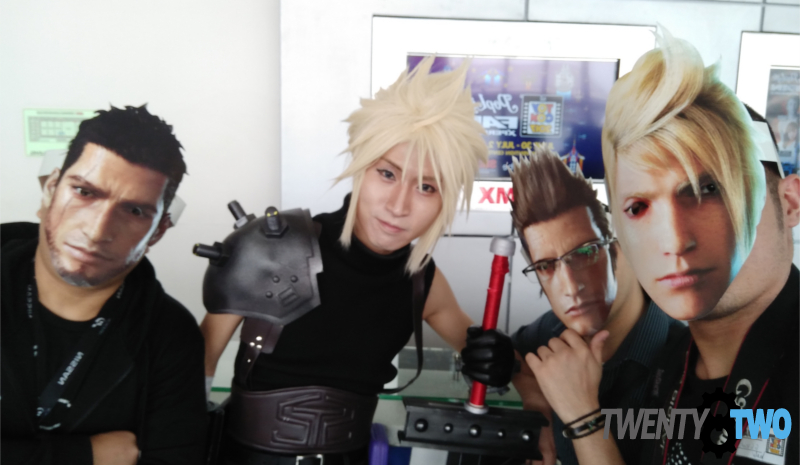 It’s 16 MP selfie shooter is excellent. It captures good color and detail, especially with great lighting. Quality does dip slightly in darker environments, but detail is not altogether lost. 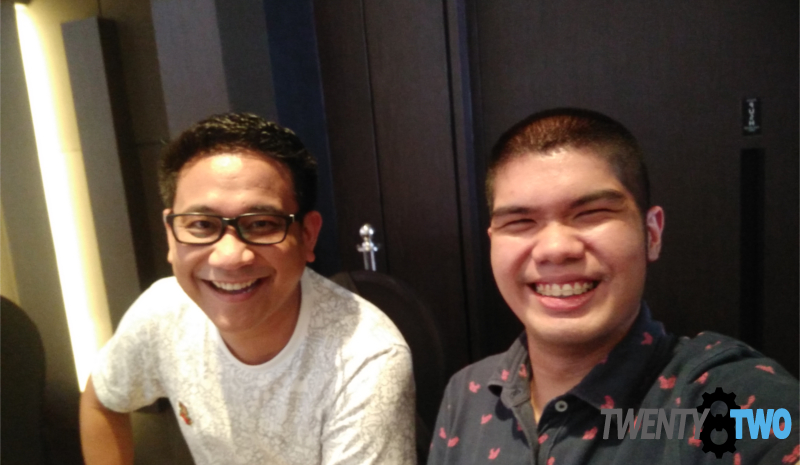 OPPO has again made another excellent selfie smartphone in the A57. Now, if only OPPO had equipped the A57 with a wide-angle front lens.

At first glance, the OPPO A57 does not hold much promise battery life-wise, as it only comes with a 2900 mAh battery. Unexpectedly, the A57 lasted for a whole day of medium-heavy use with around 30% of life to spare. This might be thanks to the Snapdragon 435 SoC, which is said to be a power-efficient processor.

It’s not a battery life king though, as it won’t last that long when used very heavily (i.e, long screen-on-time, mobile data always on) compared to phone’s in its price range with larger batteries. But overall, battery life is above average. 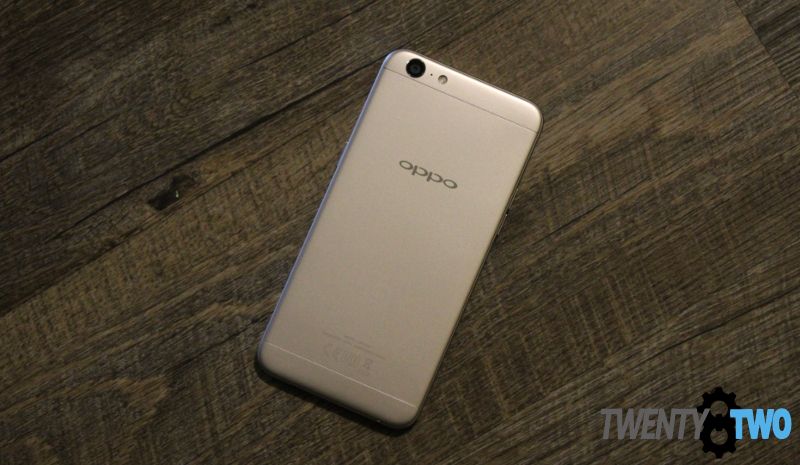 After some time with the phone (and after a number of selfies), I can say that the OPPO A57 is a great choice for selfie fanatics. OPPO continues to release phones that capture high quality selfies, and the A57 is no exception. What’s even better is that shots taken with the rear camera is improves slightly compared to last year’s F1s. While not a beast in gaming and app performance, the A57 also performs well enough for most tasks, plus battery life is above average considering the phone’s 2900 mAh battery.

It’s not a perfect smartphone though, as the 720p display might be a disappointment to users who watch lots of high definition videos. The A57’s ColorOS 3.0, while functional and has little to no bloatware, only runs on Android 6.0 Marshmallow with no Nougat update on sight.

Considering everything that the phone has to offer, the A57 is still a good phone overall, especially at its price of PHP 11,990. While some phones in the price range might be slightly better with media consumption (online videos, movies, etc.), the A57’s seflie shooter is tough to beat. So if you’re looking for a selfie shooter in the sub-15k range, the A57 is one of the best choices.

And before I forget,  yes, the A57 has quite a number of improvements over last year’s F1s; meaning that it’s the smartphone of choice if you’re going to buy and OPPO smartphone for 12k.