I’m very picky with keyboards, especially ones of the mechanical make. I’ve tried a few different switches over the years and through a combination of research and trial and error, I’ve settled on my personal preference. That said, it’s pretty obvious that not all mechanical keyboards are built the same. Brands nowadays prefer to manufacture and develop their own switches in-house, instead of relying on third-party suppliers, of which Cherry MX is a popular choice. 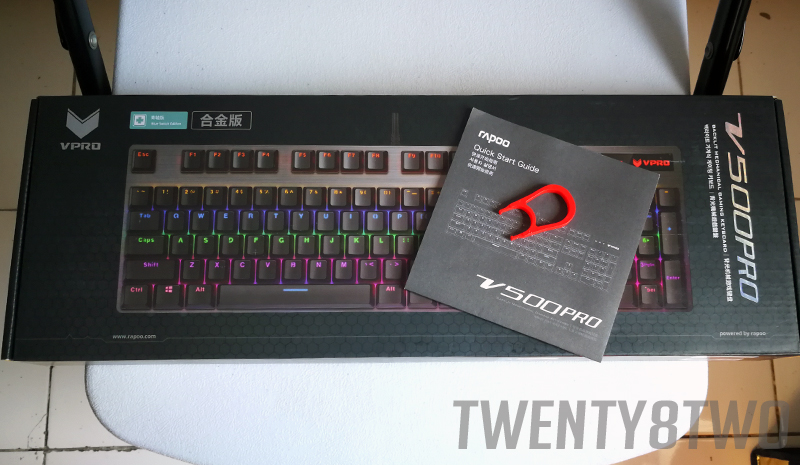 The new Rapoo V500Pro is one of two mechanical keyboards from the brand’s VPro line of gaming peripherals. The box is stylish; mostly black with foil/chrome accents. It definitely stands out on display racks thanks to its muted aesthetic. 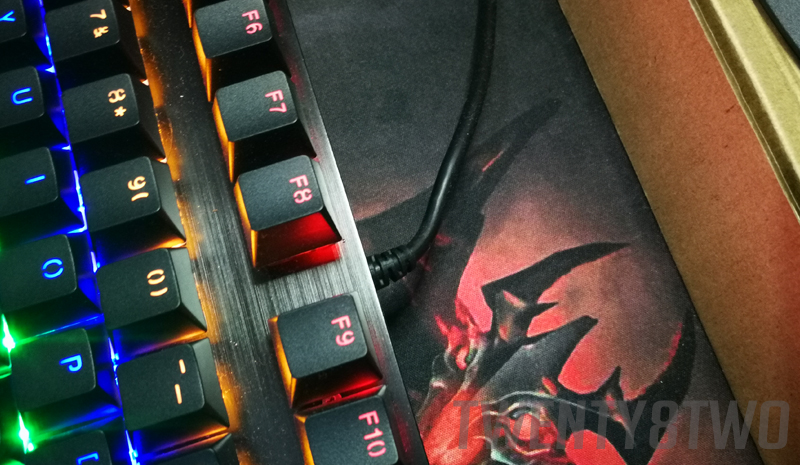 Out of the box you get a full keyboard with the function row at the top and a number pad to the righthand side. The build is solid and sturdy; no real rattling when you shake it, and the body doesn’t give when you try to bend it. The box also houses a manual and a keycap puller – a godsend if you’re starting to get your feet wet in the world of mechanical keyboards. The cord is smooth, which may or may not be to your liking. 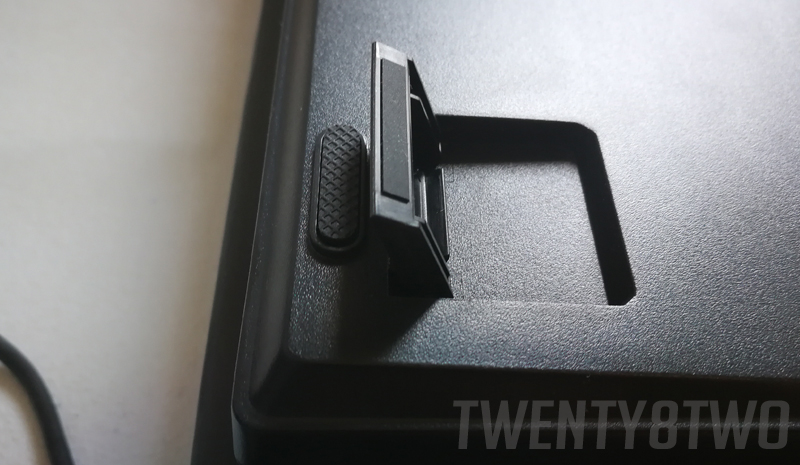 Underneath the keyboard are two fold-out feet near the top portion of the device, which helps with height. Whether you want to prop it up or keep it flat is up to you, but I liked that Rapoo put in the option, which is fairly standard as most mainstream keyboards – gaming or not – have this feature. At the bottom (nearest your body) are three rubber feet that help secure the keyboard to your table. The rubber is textured for extra grip, so gaming on a wooden table won’t really be an issue of the keyboard sliding and scratching surfaces. 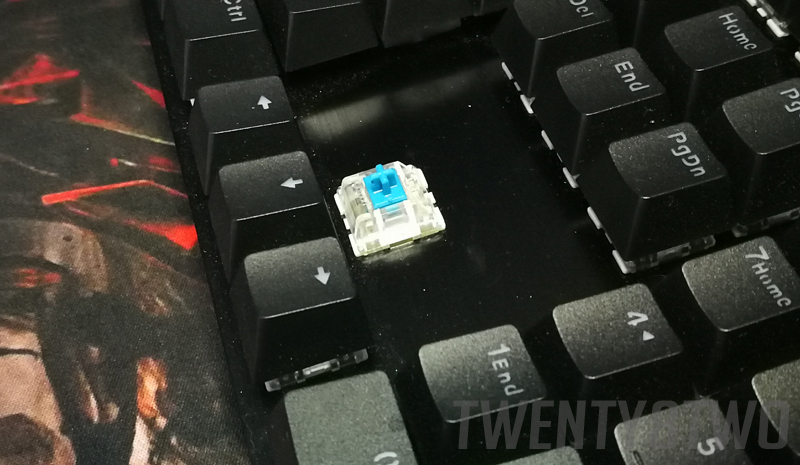 The V500Pro that I reviewed has an equivalent to blue switches for most other brands, tactile to the touch and with that distinct clicky sound when you press down on the keys. Rapoo did the R&D on the switches themselves, and that’s why the switches didn’t really have an official name/brand – yet.

Blue switches are usually noisy and a bit heavier to push down. While all mechanical keyboard switches have a tactile feel to them – making them feel different to the regular keyboards of the more generic kind when in use – the blue version of mechanical switches in general are more tactile, meaning there is a sort of bump you feel as you press down on the key. This sensation lets you know that the key has been triggered and your input has been registered. Unlike the other types of tactile switches, the blue version is a two-piece construction. The additional slider is the one that hits the bottom of the housing, which causes a click to be heard. The tactile feeling of the switch, combined with this click, is the reason why this switch is favored by typists: they hear and feel the keystroke being registered at the same time, which aids in touch typing.

I got in touch with the brand and they told me that their switches were made in-house, and line up with 60 million keystrokes. That’s a pretty high number, and it seems to me that Rapoo has done their homework when it comes to their switches. With this keyboard specifically, the bump and click are distinct, which can make for very loud typing sessions. With a Cherry MX Blue as a baseline for softer, easier key presses and a Gateron Blue as the harder, more resistant key press, I’d say Rapoo’s blue switch is closer to the Cherry MX Blue. 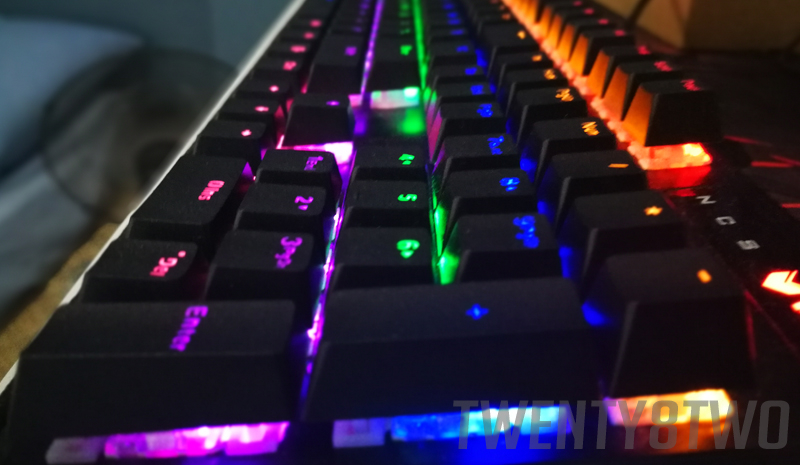 One of the great things I really liked about the V500Pro is the fact that the RGB lights don’t leak on top of each other. I purposely blurred the photo above when I took it to help illustrate that the lights don’t spill and mix with each other, something usually overlooked with mechanical keyboards at this pricepoint.

When it comes to drivers, the V500Pro currently has none. Out of the box when you plug it, it powers up to a default setting where all the RGB lights are on. There are six rows to this keyboard and each row is assigned a color. Pressing the FN + ESC keys will toggle on a different lighting mode. From default, toggle the board the first time and you activate breathing RGB. Press the key combos a second time and you toggle lights off mode. Unfortunately, the website doesn’t have the driver nor online version manual for this particular device, so this is a con for me. 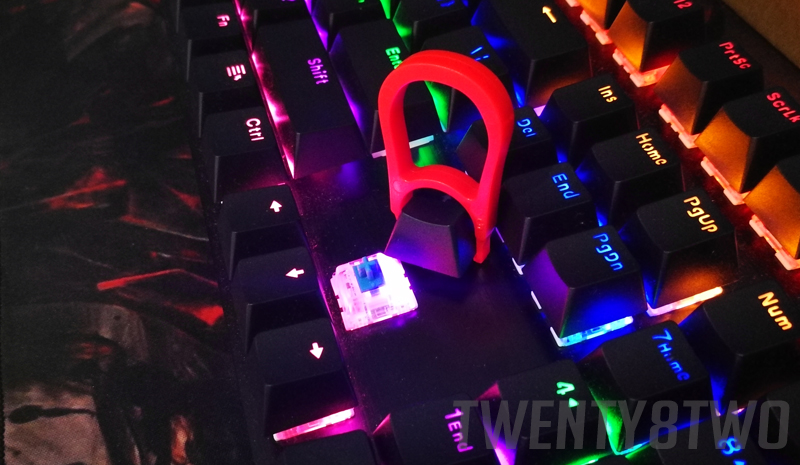 To wrap it up, the Rapoo V500Pro is a great keyboard for people who want to experience a blue switch on a solid peripheral. The full metal body of the device has no give, something I appreciate given the entry-level nature of the device. It does however, currently have no online drivers and limited RGB lighting options. Mechanical keyboard enthusiasts shouldn’t dismiss the V500Pro because the blue switches are great to type on and to game with and is something new since it was developed in-house, while beginners in the world of mech keebs will find that this is a great pickup for its price point, simplicity, and overall solid build.

The V500Pro Mechanical Keyboard retails for PHP2,495 and is available in most Silicon Valley, CompLink, and PC Express branches around the metro and in certain Luzon areas. Click here for a list of all their available peripherals.