The Imagine Cup is a global competition that empowers the next generation of computer science students to team up and use their creativity, passion, and knowledge of technology to create applications that shape how we live, work and play. And for the past 16 years, the Imagine Cup has been the world’s premier student technology competition. Every year, tens of thousands of students from across the globe compete for cash, travel and prizes and for the honor of taking home the Imagine Cup.

The Philippines National Finals showcased the best teams from the country as they pitched and demoed their ideas to experts to vie for a coveted spot at the Imagine Cup World Finals where they will compete with the best and brightest teams from across the globe for the title of World Champion, up to $100,000 cash prize and the chance to take home the Imagine Cup.

In the Imagine Cup PH Finals held in Makati last March 5, five teams competed for the title of national winner, P50,000, and the chance to represent the Philippines in the Imagine Cup Regional Finals in Kuala Lumpur. 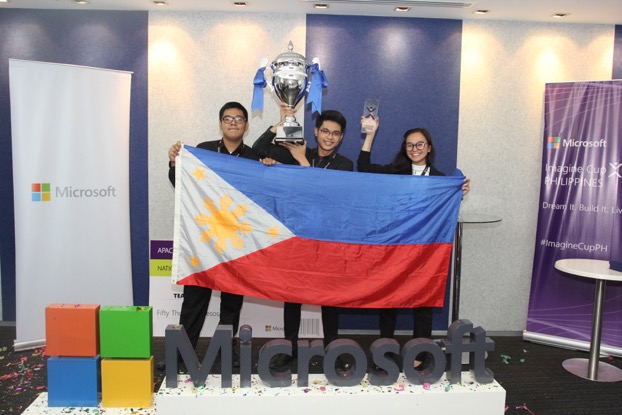 The national final was won by Team Onyx, composed of Computer Engineering students from Technological Institute of the Philippines. All team members share a passion for technology. Daniel Soriano, 18, is an active student leader for their program and is an active member of the Institute of Computer Engineers of the Philippines Student Edition – T.I.P. Quezon City Chapter. Romie Santiago, 20, is currently taking Embedded Systems track, and is adapting knowledge of hardware and software integration projects. Kyle Regino, 19, like Romie Santiago is also pursuing Embedded Systems track. She is interested in studying how things work, and use that to create new things that could help others.

Collectively, Team Onyx channeled their passion for technology and desire to help others to innovate the use of mobile applications in the field of medicine. The result is Bionyx — a mobile app that scans and analyzes fingernails and helps individuals easily identify diseases related to the liver, heart, lungs, and the blood.

Bionyx was built on the idea that our fingernails serve as a visual advertisement to our health. In fact, our fingernails could reveal diseases related to the liver, heart, lungs, and blood. Bionyx seeks to be a catalyst for early diagnosis for much bigger health problems we may have. Captured images are analyzed on Microsoft Azure across multiple data sets for accurate and timely analysis.

Asia-Pacific, and then the World

Next after is the world stage of the Imagine Cup which, in 2010, Philippine’s By Implication dominated and won. The World Finals will be held in the end of July 2018 in the United States of America.

For Team Onyx, this is the goal — to make the World Finals and compete with the best and brightest teams from across the globe for the title of World Champion, up to $100,000 cash prize and the chance to take home the Imagine Cup.

How Does Imagine Cup Work?

Students are asked to create an original technology project from start to finish – from ideation and planning, to building the project and making it an actual product. In previous years, the teams compete in the Games, Innovation or World Citizenship categories; however, for 2017, all categories have been removed from the competition, allowing any big idea to be a qualified entry, with the only requirement being that the teams must integrate Microsoft Azure, Azure is Microsoft’s open, flexible, enterprise-grade cloud computing platform, into their solutions.

Students advance through various rounds of the competition either online or through in-person National Final events organized by Microsoft subsidiaries across the globe. This year, 11 countries will be sending their National Champions to the Asia-Pacific Finals, where the World Finalists teams are determined. Winners in this round will then travel to the Imagine Cup World Finals, where they compete for cash prizes, and once-in-a-lifetime experiences.

Since 2003, the Imagine Cup has successfully served as an incubator for young innovators who create solutions to help their communities. The competition allows students from across all disciplines to team up with each other and use technology to build applications, games, and various solutions that can impact the world.